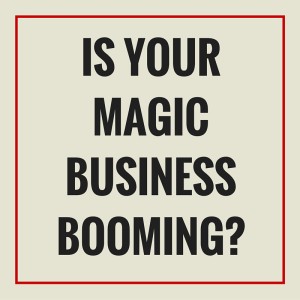 I recently received a fairly despondent email from a younger magician. Well, younger than me but that’s not hard. He was somewhat disillusioned with how his career was going. Despite being a full timer for some time and with what he thought was a fairly commercial “act,” he felt he wasn’t getting any traction and was seeking some ideas. Though I’ve never met the guy, I’ve heard good things about him and his show. Here are some thoughts and ideas for the quiet times.

# It’s always going to be harder than you imagined

Being a full time professional, supporting yourself, let alone a partner and family, is very hard work. Hobbyists and even part timers who work at a professional level, don’t or more importantly can’t understand that.

Some years ago a magic writer who I quite enjoyed, wrote on a magic forum that he felt full time magicians should be the very best at their craft, because “they have all day to practice.” In that blinding flash of ignorance, I realised he had absolutely no idea what he was talking about and I’ve since taken everything else he wrote with a grain of salt.

# Don’t worry too much what others are doing

Especially on Social Media. The frequent posting of “my office tonight” photos on Facebook, reports of “standing ovations” and exciting airline journeys can be somewhat depressing if you measure your success against others.
While it can be a good tactic to model your business on that of others, these people tend to be seeking their own self validation. Play your own game.

#Be truthful in your advertising and promotional material

While a certain amount of hyperbole is accepted in magicians advertising, deception is not.

There are several magicians in my market area who have never recovered their reputations from the false advertising they conducted in the past. Excuses like “oh, everyone does it” don’t really cut it. If you want support, referrals and to associate with other professionals in your market, don’t try for an unfair advantage.

# Doing roving magic at a company picnic is not working corporate.

Get over that in your own mind and in your publicity material.

With so much magic now being learnt and marketed OnLine, ethics in the field seem to be dropping away. Where we once learned through clubs, conventions and mentors, now it’s often on our own. No wonder those starting out sometimes have little idea about what is right and what is wrong. Perhaps we all need to make more of an effort to educate, rather than just shrug and say “it’s just the way it is now.”

Having a 10 year plan is an excellent idea, but things change. Markets change, demand for shows and show styles change, you will change. Be flexible and regularly re-evaluate where your focus should be. This goes against the wisdom of 90% of those motivational quotes that get spread around, but sometimes the bravest thing to do is to give up on a long held dream that doesn’t make sense any more.

Snappy suits and custom designed stage wear do make a difference. That instant first impression when you walk onstage or into a venue is a powerful thing. Develop a relationship with a good designer or tailor. Choose a celebrity and model their fashion sense but also work on developing your own trademark look or brand.

Get out there and support other magicians presenting shows for the public. Well attended shows are good for the industry and your marketplace in particular. As the saying goes, a rising tide lifts all boats.

If things are a bit slow, shift your attitude and treat this as a positive. Work on new material, work on your publicity machine. When things fall into place, and they will, you’ll suddenly look back on those days that you frittered away with envy.

Next post: Motivate Your Memory! Our new Online Training Course