Do you hate your Magical Competitors? 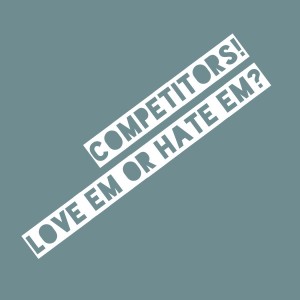 How do you feel about competition? For many magicians, the word that there is another magician in their market strikes terror in their hearts. After all, that’s just one more guy who’s going after the shows you’re trying to land, which means less work for you. That seems to be the conventional thinking among magicians, and to my way of thinking (and that of some pretty knowledgeable marketers), it’s completely wrong.

To most magicians, the potential market is a finite, pre-set amount. Since most weekend warriors are trying to work birthdays, the feeling is that since the pool of potential birthday parties isn’t increasing, a new face in the mix is cutting into our turf. Every birthday the other guy lands, is one we aren’t going to get. That may be true, but think about it- how many birthday parties can one person do in a weekend? I don’t think it is possible or desirable to do more than 4 or 5 birthday shows a day (Personally, I don’t like to do more than 3 a day, but I’m just lazy!) So is that one new guy really taking that much work away from us, or are we just using it as a reason to justify our lack of marketing activity? I feel it is the latter, and I’ll tell you why.

A truth of consumer behaviour is that competition actually increases the size of a market; the more players in the game, the bigger the game gets. Think about the situation in small towns located off an interstate highway- aren’t all of the restaurants located right across the street from each other? When a new Burger King opens up, don’t they almost invariably open right by McDonald’s? I used to think this was dumb, but a while back I read a book called “The 22 Immutable Laws of Branding“, by Al Ries. In it, he states that this is done deliberately by Burger King, and that as a result of this behaviour, traffic increases for BOTH restaurants. Lets face it- if you’re driving along the highway, and you see a sign that shows ONE restaurant at the next exit, you’re less likely to get off than if the sign indicates there are 10 restaurants. The lone restaurant doesn’t attract as much traffic as it would if it were situated in with the others.

This doesn’t just apply to restaurants. In New York City, for example, there is an area known as “The Diamond District”. Basically, it’s a collection of jewellery merchants, all located within a few blocks of each other. In some instances, competing vendors even open up in the same store, as a sort of mini-market. In my town, there is a stretch of road that contains about 20 auto dealers. You would think initially that each takes away from the other, but in both instances, when someone wants to buy a car, or a piece of jewellery, they know exactly where to go. The level of competition has raised consumer awareness, and each merchant benefits from being located near his competitors.

Well, what about magicians? How does this apply to us? I would submit that the concept is exactly the same. Think about Las Vegas- it seems like you can’t swing a dead cat* without hitting a magician, and yet the showrooms are filling night after night. More competition creates higher demand. Can’t get into Siegfried and Roy? Go see Lance. He’s sold out? Go see Dirk Arthur. People go to Vegas expecting to see a magic show, and the casinos know that competition is good for everyone. If people want to see Siegfried and

Roy, they may end up going to see someone else- that person has benefited from S & R’s notoriety.

Think about magic specials. Technically, they are competition for live performers, right? After all, if someone has just watched David Blaine, they don’t need to see ANOTHER magician at their company picnic, do they? And yet any performers find that bookings go up when magic is on TV more. Awareness of our product is raised by our competition.

So, rather than gnashing your teeth about your competition, do what I do. Embrace them (figuratively- I’m married!). Give them your overflow work- you will be surprised how much work comes back to those who give it out freely. Some performers in my market know that I am a very good source of overflow work. Rather than disappoint people who call me when I am booked, I give them 3 or 4 names of performers whose work I know is good. I even tell the caller-“If none of these performers are available, call me back, and I will help you find someone else.” This is an interesting concept I learned from a hotel in Las Vegas, and it works WONDERS.

When I graduated from college, a buddy and I decided to travel to Vegas. The way I like to travel is with no reservations, and only a rough idea of where I am going to end up. We arrived in Vegas without a hotel, and found many hotels were sold out. We went to Circus Circus, which had a unique policy- if they don’t have a room for you, they will call other hotels and find you one. With a policy like this, you can bet that Circus Circus gets a lot of business. For years after that trip, I would make CC my first stop, knowing that if I couldn’t stay there, they’d help me find a room.

Compare this with the phone call you get from someone looking for a birthday show. “Sorry, I’m booked.” CLICK. Think you’ll ever get called back again? On the other hand, if you help them find someone who is good, it is possible that performer may get the call next time. It’s also very likely that they will remember how helpful you were, and they will want to get you instead. After all, you were so good, you were booked before the other performer, so you must be even better than he was!

I realize this is a somewhat strange, non-magic related column. But I think it’s an important topic. I get very sad seeing magicians being friendly to each other at club meetings, and then tearing each other apart behind their backs because the other performer “got my show”. There’s more work around than any of us can do- the more people see magic (good magic!), the more demand will be stimulated. That’s good news for all of us, so build up a network, and start giving away some work! See you next time!

*- PS to Animal Lovers. It’s just a figure of speech- I have 7 cats myself- all alive, all unswung. Relax.

This article first appeared in Richard Robinsons terrific “All Magic Guide” and is reprinted with Terrys permission.

The one Question you can ask worth Thousands!
Turning a Magic Price Shopper Into an Advocate
Cruise Ships
{ 1 comment… add one }

Previous post: Turning a Magic Price Shopper Into an Advocate