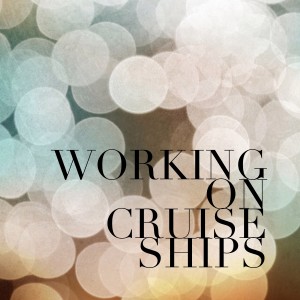 Always somewhere in the daydreams of magicians and other variety performers is the thought that perhaps a life on the ocean blue would solve all their problems.

Food and accommodation all paid for, glamorous passengers and fellow staff, sunshine, exotic ports, performances in the glittering showrooms, time to read and study.

The reality is a bit different. Cruise ships don’t suit everyone.

There are some major difficulties that you may not have thought about. I hope the following tips and ideas may make you at least aware of these areas and avoid some blunders that could ruin your chances of ever working cruise ships.

Note. I have only skimmed but not read the recent “Cruise Ship Magicians Handbook” by Fred Becker. But, I’ve just had as a house guest one of Australia’s best magicians, Raymond Crowe (World’s Greatest Magic 4 and big MagicCoach fan).

He recently did his first cruise ship ever, (on the QE2 !).

He studied the book before he went and said it was invaluable. He gave it his highest recommendation. If you are seriously considering chasing this market then you should get it.

Ideas and Tips on Cruise Ships.

Don’t try and work the market until you are ready. If you launch yourself at the Cruise Lines and fail to make the grade, then you can ruin the opportunity for yourself for a long long time.

If you do poorly in the shows, fail to dress properly around the ship or in anyway antagonise the passengers or Cruise Staff, then you get a big black mark. A mark that could remain for years.

Do your research. Talk to others about appropriate dress and behaviour.

Don’t think you can practice up several new routines during the day in your cabin and put them into the show to make up time.

They’ve seen a lot of acts and know when you’re bluffing.

So how much time/material do you need?

This is difficult to answer. The only real answer is “as much time as you are asked to do”.

And don’t just rely on the word of the agent or bureau that puts you on the ship. The Cruise director is King and will ask for whatever he needs. That’s the amount of time you will have to do.

On some ships it may only be 2 different 30 minute spots. Other ships may need two different 45 minute sets, plus a 15 here and could you do another 5 in the closing show. These times start to add up!

If you have an hour and a half of solid material, or better, two hours, then you are probably safe.

Some ships do have late night “comedy club” sessions and some cruises are designated 18 – 35’s where risky material is OK, but generally it’s not.

Not all your audiences will speak English.

Important to find out about the typical audience. Especially if you are doing a segment of a longer cruise. (I worked a segment of a world cruise on what turned out to be a French ship with a French speaking audience. Wow, that cut into my material.)

A lot of showrooms are not that great for magic.

They are getting bigger and better, but tend to be designed for the Vegas Revue style shows. Audiences can be wrapped well around on three sides. Backstage space can be minimal. Sight lines can be very revealing. One Russian ship I worked had a balcony with seating, behind and above the stage.

The stage moves up and down! Sometimes a lot. If you are bringing boxes make sure they have locking castors. If you are getting people up, realise that getting someone to stand for a while on a rocking open stage may be very difficult. You may not even be allowed to do it. This could chop out another bunch of material.

A chair for them to sit in could help (and give you something to steady yourself).

(Juggling during very rough conditions can also be extremely tricky. Especially clubs, where full rotation can be interrupted by the floor rising or falling. I once had to perform during the early stages of a typhoon in the South China Sea. My act then had a segment that included 5 ball juggling followed by a fast 3 club routine. The balls went fine.

The clubs went into the audience.)

It is hard to keep in touch with clients and work opportunities at home. Once people hear that you are working ships, they tend to think you are unavailable where in reality you may just be doing sporadic cruises.

An information sheet or newsletter going out regularly could help here. Internet Cafes have improved this situation a lot and most ships now have Computer access onboard so you can stay in touch. Crew usually get a discount on the very expensive Internet at Sea charges.

Meet as many people on board as you possibly can before you work. This always works. Here’s a great tip that was passed on to me.

As soon as possible, visit the Spa, introduce yourself and perhaps perform something appropriate for the staff.

The steady stream of clients that passes through after that, will all get told about “the charming magician, you must see his show.”

On some big ships there will be a lot of activities on at the same time as you perform. Movies, bingo, casino and other performers etc. A full house of people keen to see your show will help your reception and your ratings.

Don’t get involved in onboard politics.

There is always something going on. You are wise to steer well clear. Ships are a hot bed of gossip & rumours. Danger lurks at every turn!

Hey, but it’s not all bad. You will meet some fabulous people and get to work with some incredible acts. The market is booming and more and more ships are getting built. The call for entertainers is stronger than ever. Children’s Entertainers are also in demand, as some ships are specifically built for the family market or do holiday cruises.

And it certainly is a way to see the world, or at least parts of it. Without pursuing that market, I probably never would have made it to India (Goa, Bombay, Madras, The Andaman’s) Hong Kong, Singapore the Philippines or the exotic Maldives. Or any of those scattered small outcrops in the South Pacific such as, Bali, Vanuatu. New Caledonia or Fiji. Or seen the historic World War Two battlefields of Guadalcanal, Iron Bottom Sound, Bloody Ridge and the back streets of Port Moresby.

Are you a Publicity Hound?
Do you hate your Magical Competitors?
Magic Charity Part 2
{ 0 comments… add one }