A Giveaway that Makes you Money! 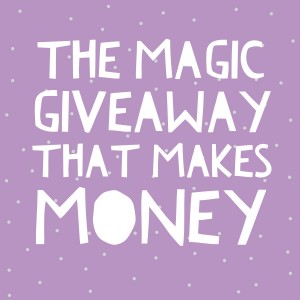 A GIVEAWAY THAT MAKES YOU MONEY!!

I spotted this idea in another performers emailed newsletter and asked the writer, BJ Hickman, to elaborate further and if I could share the idea with you.

But it’s probably the most complex giveaway I’ve seen for a while.

Complex in it’s size, amount of work that it would take to put it together and complex in what it achieves for him.

It gets his contact details out into the homes of his market audience. And it makes money. It more than pays for itself.

It generates profit for itself and creates more performances.

Who’s not going to take it home after a show to try out the tricks? The parents read information that is useful (safety tips, Library Info, resources on Magic) and see photos of BJ – “at the Magic Castle, doing his “speaking presentation” etc. It positions him exactly how he wants.

But printing 12,000 copies isn’t cheap. To cover this cost, and to make money, he sells advertising space throughout the paper. And at a fairly good rate. A full page inside for example is $900.

The advertisers know exactly where these papers are going and who’s going to read them. There are adverts from – Pet Supplies, Party Supplies, Toy Shops etc. Auto Repairs, Garden Shops, Restaurants etc.

BJ of course advertises his own work, collects feedback and builds a maillist.

I’m not going to elaborate any further on this. Think about how it works and what it achieves. It’s a great idea.

Next post: If I Only Knew Then What I Know Now – The Mentalist Edition